Football Can Be Linked With Brain Damage, Study Shows 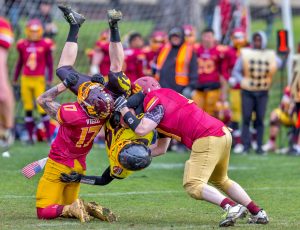 Photo by John Torcasio on Unsplash

Football is back! Today, September 8th kicks off the 2022-2023 NFL season with the defending Super Bowl Champions, Los Angeles Ram taking on this year’s Super Bowl favorite, Buffalo Bills. In the United States, football is both the most popular high school sport as well as the most popular sport to watch. Many come to watch and play because of its hard-hitting nature in which you are required to tackle the player with the ball just to end the play. One Virginia Tech study found that an average player sustained 3,300 hits in 10 games and 35 practices, about 50 of which were to the head.

Photo by Hermes Rivera on Unsplash

For years, it has been shown that boxers often develop CTE and other types of brain damage from repeated blows to the head.

But it was not until recently that people started to look at the effect of playing football on overall brain health. In 2007, a New York Times article wrote about former Philadelphia Eagles safety Andre Waters. Dr. Bennet Omalu, a neuropathologist at the University of Pittsburgh claimed Waters’s brain had deteriorated rapidly due to the repeated hits to the head. Despite, only being 44, Omalu said that his brain was similar to one of an 85-year-old man with some signs of early Alzheimer’s. Water’s brain deterioration is what Omalu thinks caused his eventual suicide at the early age of 44.

CTE is the word often used to explain cases like Waters. CTE is when an excess of tau builds up in the brain. Although tau is naturally produced, too much of it can cause brain cells to become less effective and even kill them. Because of the decrease in cognitive abilities, some of the symptoms of CTE are memory loss, depression, and suicidal thoughts. CTE gets progressively worse over time with 4 different stages. Based on symptoms alone it is impossible to tell what stage of CTE that person has. Generally, you have to look at microscopic lesions in the brain and more lesions means the disease is worse. As of now, there is no known cure for CTE because it is very hard to identify unless the person is no longer living and they can dissect the brain. 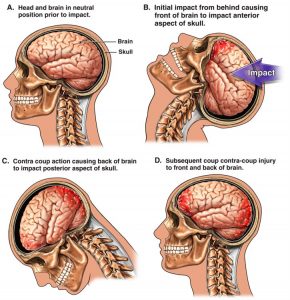 A concussion is one hit to the head that caused shaking in the head which leads to some temporary symptoms including headaches, memory

loss, dizziness, and ringing in the ears. Sometimes the symptoms are felt immediately, while other times if may take hours to days before you start experiences symptoms from your concussion. If you experience these symptoms after getting hit in the head you should contact your doctor. It is important to stop any activities that may cause you to get hit in the head again because as you learned previously, repeated hits to the head is what can cause CTE and other permanent brain damage. Other preventative measures you should take to recover from a concussion is to limit screen time and resting. Look out for others that may have gotten a concussion, if someone has hit their head hard onto the ground or another person check to make sure they are not experiencing any of the symptoms mentioned above.

For more information and to learn where we got this information check out the following websites: